An update on our Sacramento work

It’s shaping up to be a big year in the state capital! I wanted to send an update on some of our priority efforts so you and your loved ones can start plugging in. We’re counting on CURB’s powerful network — both outside and inside prison walls — to convince decision-makers that they must support communities by closing prisons and jails and reducing the number of people caged inside them. 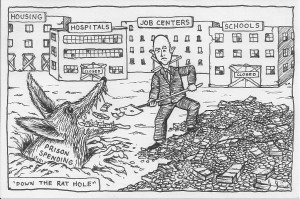 The corrections budget continues to climb, with the state proposing to fortify prison capacity, broaden the net of the CDCR, and waste another $250 million on jail expansion. Meanwhile, vital human services remain critically underfunded. Throughout the budget season, we’ll be calling on elected officials to redirect funds from imprisonment to social and economic programs that can strengthen our communities. Read our preliminary budget cheat-sheet, and mark your calendars for these key budget hearings:

Our work stopping prison and jail expansion in the budget is coupled with our efforts to reduce incarceration by changing state laws. I’m excited to announce that CURB is co-sponsoring two bills this year:

These bills are important steps towards ending the state’s reliance on incarceration. If you or your loved ones would be impacted by any of these measures, please get in touch with me at lizzie@curbprisonspending.org, 510-435-1176, or at the mailing address in Oakland below.

There are plenty of ways to get involved in our state-level policy work, even if you can’t make it to Sacramento in person, so stay tuned for our action alerts. I’m looking forward to taking on the capital with you this year!