This week, we have had some major developments in the fight against mass-incarceration! 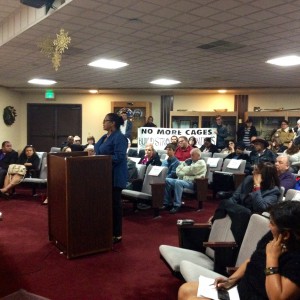 On Tuesday, emboldened with newly-elected leadersip, the Los Angeles County Board of Supervisors finally approved the creation of a civilian oversight commission of the embattled Sheriff’s Department.

This crucial victory has been a long time coming, and shows that we can make progress when elected leaders embrace new ideas!

There is a lot of work left to do, if we are to ensure that the commission is reflective of the people it should represent: those individuals and families who have been impacted by mass-incarceration and Sheriff’s violence.  But we at CURB know that our movement is getting stronger every day, and with supporters like yourself on-call to help us, more victories will surely come.

However, there is still more work to do to stop Adelanto’s jail expansion!

Last night in the High Desert, CURB and our allies gathered at the Adelanto City Council meeting to oppose approval of the $327 million dollar construction of an overflow jail for Los Angeles County.  We listened to Doctor Crants, private-prison enterpreneur, spin his tales of the revenue the jail will bring to the city.  However, there is an outrageous gap in his plan!

“Doc” Crants admitted he has no assurances from the Board of Supervisors that L.A. wants this jail!

We already know that neighboring Victorville doesn’t want the jail, and you can read about it here.

We need to let the L.A supervisors know that they can stop this expansion.  Without their approval of lease-revenue bonds, the project will suffer a crushing setback.  We are going to keep the pressure on the new leadership to keep making the right decisions, like they have with the civilian oversight commission.  You can help.

Sign and circulate our petition to stop Adelanto expansion!