In push to keep mentally ill out of jail, county to expand crisis center

Los Angeles County Dist. Atty. Jackie Lacey is heading up a task force focused on diverting mentally ill criminal defendants from jail. She spoke to the county Board of Supervisors Wednesday about her group’s work. 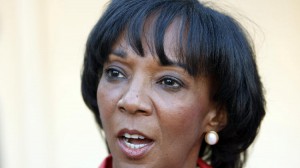 At the urging of Dist. Atty. Jackie Lacey and others lobbying to keep mentally ill people from being locked up in county jails, Los Angeles County supervisors voted Wednesday to fund several programs for people undergoing psychiatric crises.

The supervisors voted to use $40.9 million in state funding for opening three new 24-hour psychiatric urgent care centers, where police can bring people undergoing mental health crises instead of taking them to overcrowded emergency rooms or jail.

The money would also help pay for an estimated 560 new residential treatment beds and to create 14 new crisis response teams that send mental health workers — sometimes in conjunction with law enforcement — to respond to incidents involving people believed to be mentally ill.

The total cost of the new programs will be an estimated $109.4 million, to be paid for by the new grant money and other state funding programs.

Lacey, who is leading a task force studying diversion of the mentally ill, called the decision “huge.”

“Up until now, jail has been used to stabilize people,” she said.

The report found that “it’s often more time-efficient for law enforcement to book an individual into jail on a minor charge … rather than spend many hours waiting in a psychiatric emergency department for the individual to be seen.”

Monterey Park Police Chief Jim Smith, a member of the task force, told  supervisors that the expanded crisis centers will enable officers to “complete the intake process and be back on the street in 15 minutes rather than hours.”

Sheriff-elect Jim McDonnell praised Lacey for her “leadership in bringing together county leaders, justice system officials, mental health experts and community voices as we seek to develop a comprehensive plan for how our justice system addresses the challenges and concerns of those suffering from mental illness.”

The task force is expected to come to the board with a comprehensive set of recommendations early next year.

Dozens of advocates spoke in favor of the efforts to increase diversion, although some cautioned that they do not want to see more money going to locked psychiatric facilities or involuntary treatment.

Many of the advocates — as well as Supervisor Zev Yaroslavsky, who retires next month — urged the board to put the brakes on a $2-billion plan to rebuild the dilapidated Men’s Central Jail until they see how many jail beds are freed up by the diversion programs.

Diana Zuniga, representing a coalition of groups opposed to the jail plan, said the number of county jail inmates will also be impacted by the passage of Proposition 47, which will reduce penalties for drug possession and other nonviolent crimes, and the increased use of “split sentencing,” in which inmates are given shorter jail sentences, followed by mandatory probation.

“All of these are not separate from the $2-billion jail plan and will dramatically reduce the amount of people we have incarcerated in Los Angeles County jails,” Zuniga said.

Lacey said she believes the Men’s Central Jail needs to be replaced, but did not take a stance on what the size it should be.