Los Angeles— Plans to build a new 1,604-bed jail for women in the City of Lancaster at the vacant Mira Loma Detention Center have generated responses of confusion and outrage in Los Angeles County and across the state.  At Thursday’s public scoping meeting citizens are asking for two additional public meetings to be scheduled after the first Draft Environment Impact Report (DEIR) is released—one meeting in Lancaster and one in the greater Los Angeles area—and they demand the DEIR be translated into Spanish to allow for more public input into this process.  They are demanding that the Environmental Impact Study address, in depth, the environmental conditions that would impact the health of those who would be incarcerated on the premises as well as their families and children, and people employed at the jail.“The City of Lancaster and Los Angeles County do not need more jail cells, and there isn’t any support in the community to build them,” says César M. Vega Magallón of Antelope Valley Dream Team.  “Lancaster residents, like the rest of Los Angeles County, struggle every day with substandard housing, over-crowded schools, a lack of social services, low-wage jobs, dirty industry mixed in with residential sites, industrial truck traffic, few healthy foo 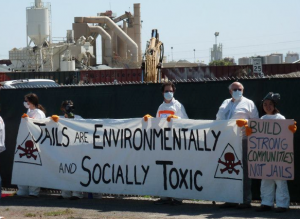 d outlets, and severe air pollution.  The proposed cost of building and operating yet another jail in the Antelope Valley would best be spent on resources that preempt the need for jails.  For the growing Latino and immigrant populations in the AV, funding prisons and jails over the community’s basic necessities is irresponsible at best, and at worst it’s downright destructive.”The initial report states the location has non-attainment for Particulates and has severe non-attainment for Ozone, which can negatively impact the health of people in this particular region.  Ozone is a cause of asthma and has been determined to cause harmful effects on people with respiratory issues and other vulnerabilities.“The proposed women’s jail will pull families apart and damage the health of the people incarcerated.  Realignment was implemented to help prisoners’ transition into the community and keep them closer to their supportive network.  Sending people from Lynwood to Lancaster, a nearly 80 mile commute, will interfere with their ability to interact and be with their loved ones, the very people who aid in the process of rehabilitation and overcoming the traumas of imprisonment,” says Cindy Delgado of the Youth Justice Coalition. “The imprisoned women of Los Angeles need support and alternatives based in the community, not another jail that will destroy their health and well-being.”The site is “identified in government databases as having a hazardous waste generator and is [also] the site of aboveground and underground fuel storage tanks,” according to the initial report.  Previous studies reported in an article titled Death Dust, by Dana Goodyear, in the New Yorker (January 2014) states, “The highest rate of infection is in the Antelope Valley, a rapidly developing outpost of the county that adjoins the southern edge of the San Joaquin Valley.  In the past decade, the number of [valley fever] cases has increased by five hundred and forty-five percent.”  There is no analysis of valley fever in the initial report.“We don’t need more jails,” Mary Sutton of Critical Resistance. “There are dozens of innovative policy initiatives used in other counties that have proven to reduce the jail population, increase public safety and save taxpayer dollars.  Why not implement them in Los Angeles?  Not to mention all the health implications that come along with this irresponsible and costly jail plan.”Lastly, in consideration of California facing a historic drought, the initial report further notes that Antelope Valley has been engaged in a drawn out adjudication process to decide if property owners or public water suppliers have the rights to the scarce amount of water available.