We stand with the family of Mike Brown, the people of Ferguson, and those traveling from across the country to Missouri this weekend for the Black Lives Matter Ride, as they continue to stand up for justice and fight back against state violence in our communities.

We continue to envision a world where deadly racism doesn’t plague our communities, where policing and imprisonment are not used to answer the social and economic problems we endures.

What we are seeing in Ferguson reminds us of all the Black and Brown, named and unnamed, who have lost their lives at the hands of law enforcement. We continue to stand with and fight for Ferguson after Mike Brown’s murder; Oakland after Oscar Grant’s murder; Santa Cruz after Frank Alvarez’s murder; Los Angeles after Ezell Ford’s murder; and countless other communities who continue to endure police brutality, arrest and imprisonment. 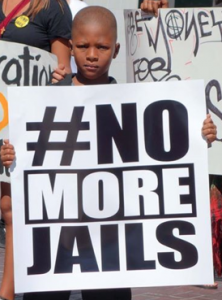 Racism is a core component of our criminal legal system. From police contact, to arrest, to charges, to convictions, to sentences, to parole: racism determines who moves to the next step in the system and how inhumanely people are treated along the way.

While Black people are 13% of the US population, they make up more than a third of those killed by police across the country. Here in California – like the rest of the nation – Black men are dramatically more likely to be imprisoned than any other group of people. Black men are 6.6% of our state population but 29% of our prison population.

This weekend, we encourage you to follow the “Black Life Matters Ride,” a national call to action and a slogan under which Black people can unite to end state-sanctioned violence in Ferguson and across the country.

The lives and losses of our people inside and outside the prison walls will not be forgotten. We ask that you stand with us as we continue to organize against these assaults on our communities.

In solidarity and unity,