by Tynan Krakoff, Californians United for a Responsible Budget

Anti-prison expansion activists across California have had a busy spring pushing back against controversial expansion plans. Members of Californians United for a Responsible Budget (CURB) acted swiftly last month to defeat two legislative bills which would have rammed forward over $4 billion in prison and jail construction money [AB 2356 (Gorell) and SB 1377 (Nielsen)]. 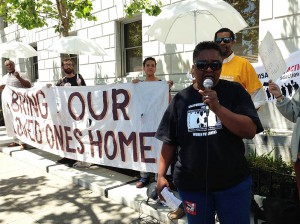 Samantha Rogers of California Coalition for Women Prisoners speaks to a crowd in front of the State Building in downtown San Francisco at a rally responding to Gov. Brown’s May Revise Budget, which includes an increase in prison spending of 2.9 percent, topping $12 billion. The rally, one of many across the state coordinated by CURB, included other anti-prison expansion and anti-poverty organizations to demand just and life-affirming budget priorities and restoration of the state’s social safety net.

“Building more jails and more prisons would have continued policies that have starved education and social services of funding and would have sentenced future generations to a state that spends money on cages but not on care. We hope to use this momentum to push for further cancellations of prison and jail expansion dollars in this year’s proposed budget,” said Emily Harris, statewide coordinator for CURB.

This victory sends a clear message that Californians want a different future for their state and are willing to take action for a future that prioritizes jobs, education, housing and healthcare over prisons and jails.

CURB, a statewide alliance of over 65 organizations working to end the expansion of prisons and jails and to reduce the number of prisoners in the state, has been organizing large-scale opposition to the antiquated logic of “tough on crime” policy.

This victory against SB 1377 and AB 2356 reflects the fighting spirit and creative organizing of people all over California – from Los Angeles to the Central Valley, from the Bay Area to San Diego. We are inspired by the determination of Californians organizing against the devastation of imprisonment, while also building up a vision of strong and healthy communities.

Although these two bills were defeated, anti-prison advocates are continuing to challenge the $500 million that remains in the proposed 2014-15 state budget. In an op-ed published in the Sunday Sacramento Bee that appeared a few days before Gov. Brown released his May Budget Revise, co-authors Isaac Lev Szmonko and Emily Harris pointed out that “the deep cuts to social programs for people outside prison over the years [have] been replaced by a parallel expansion of prison hospitals, mental-health jails, re-entry prisons and gender-responsive jails. While we hope every person in jail and prison has access to quality programming, we also know that people are best served out of lockup.”

Ahead of the May Budget Revise, CURB published a slew of alternatives for “What California Could Do With $500 Million, Instead of Build New Jails.” It is appalling that since 2011, California has spent over $1.7 billion subsidizing unnecessary jail expansion. As it turns out, the more humane alternatives to expansion are also less expensive and more effective.

In response to the May Budget Revise, activists held a Statewide Day of Action May 14 in six cities calling on Gov. Brown to cancel the $500 million slated for jail expansion. The many rallies included other anti-prison expansion and anti-poverty organizations to demand just and life-affirming budget priorities and restoration of the state’s social safety net.

The Senate Budget Subcommittee took a step in right direction by voting 3-0 against the $500 million and instead voted 2-1 to provide this money for county construction projects “designed to provide rehabilitative services and housing for individuals convicted of crimes.” These projects can include, but are not limited to, transitional housing, day reporting centers, mental health, and substance abuse treatment facilities and jails.

“Let’s be honest. As long as our leadership is offering money to expand jails or prisons, there won’t be the political will or the funding to restore the $15 billion in cuts made to the social safety net or the ability to build and sustain alternatives to incarceration or anti-poverty programs that are proven to reduce recidivism,” said anti-poverty organizer Pete Woiwode of the California Partnership.

Unfortunately, the Assembly Budget Subcommittee did not follow the Senate’s lead, instead voting unanimously to approve the governor’s budget proposal. “This vote demonstrates a clear contradiction. I think the Assembly is stuck between their desire to do the right thing and their fear of the wrath of the governor and the Sheriffs’ Association” said Diana Zuñiga of Californians United for a Responsible Budget.

If the budget is approved, the monetary faucet for jail construction, the Board of State and Community Corrections (BSCC), would divvy up the $500 million to counties across the state. Earlier this year, the BSCC split up $500 million to 15 counties through previous funding (SB 1022). Over 30 counties had applied. Several counties that are planning to build new jails were denied funding, including San Francisco and Los Angeles, two counties where CURB members are organizing against these plans.

The City and County of San Francisco wants to replace its 850 Bryant St. jail in downtown San Francisco. A project that would cost upwards of $300 million – before taking into account interest, upkeep and other fees. Investing in this jail expansion project would create 30 years of debt that San Francisco taxpayers would be responsible for. Two of San Francisco’s jails are empty altogether and three quarters of the jail population are pre-trial – meaning they’re too poor to afford bail.

Investing in this $300 million jail expansion project would create 30 years of debt that San Francisco taxpayers would be responsible for. Two of San Francisco’s jails are empty altogether and three quarters of the jail population are pre-trial – meaning they’re too poor to afford bail.

The county’s main proponent of its stagnant jail replacement project is Sheriff Ross Mirkarimi. Yet, thanks to significant community opposition, even he is beginning to realize that in a county with half-empty jails, building a new one is simply not viable. “If the numbers continue to drop in the jail population, and it’s evaluated where it’s going to hold steady, then this question can be up in the air about the jail itself,” Mirkarimi told a Beyond Chron reporter.

Opposition to the San Francisco jail replacement project is continuing to grow. On May 21, United Educators of San Francisco (UESF), a union representing nearly 6,000 teachers and paraprofessionals in SFUSD, voted to oppose construction of the proposed new San Francisco jail. Over 50 union members signed onto the resolution in opposition to the jail. On May 7, members brought it to the UESF Executive Board meeting, where it passed overwhelmingly. From there the resolution moved to UESF’s General Assembly meeting, where it passed nearly unanimously.

“As teachers, we know that education can work, but incarceration does not. Today, I’m proud to stand with other educators in San Francisco who are committed to shifting the priorities in our city towards valuing an educated future, instead of dumping more money in a system that is failing our communities,” said Kathy Rose, a UESF member and teacher at Five Keys Charter Schools, a school that serves incarcerated and formerly incarcerated adults.

“Sheriff Mirkarimi said publicly that San Francisco might not even need a new jail. Now the teachers have said resoundingly that they won’t accept the shortsighted jail proposal,” said Andrea Salinas, a San Francisco resident and member of Critical Resistance. “As we await the updated jail population memo from the Controller, we expect further evidence that this jail is impractical, wasteful of city resources and taxpayer money, and grievous to the city’s poorest and most disenfranchised.” Although this struggle is far from over, momentum is on our side.

Tougher battles lie ahead in other counties, however.

Advocates are pushing for the cancellation of a series of proposals to expand the state corrections system, including a $2 billion plan in Los Angeles to replace the Men’s Central Jail with a new women’s jail – a proposal the Los Angeles Register calls a mistake. The scandal-ridden LA county jail system is the largest in the United States. Close to half the women held there are pre-trial.

“How could it be that in the 21st century stakeholders in the richest county in the richest state of the land can conspire and agree that locking up women 75 miles away from their children – with mental illness, and/or not convicted of a crime – is a good idea when all evidence shows that locking people up perpetuates violence and recidivism?” ask Mary Sutton and Diana Zuniga in an op-ed recently published in LA Progressive.

“How could it be that in the 21st century stakeholders in the richest county in the richest state of the land can conspire and agree that locking up women 75 miles away from their children – with mental illness, and/or not convicted of a crime – is a good idea when all evidence shows that locking people up perpetuates violence and recidivism?” ask Mary Sutton and Diana Zuniga in an op-ed recently published in LA Progressive.

With all the evidence out there that we can’t build our way out of the prison crisis, it begs the question: Why is California trying to build more jails and prisons? Cheaper, and more ethical alternatives are abundant. We need to build strong communities, not prisons and jails!

Tynan Krakoff, an Oakland based organizer, can be reached at tynan@curbprisonspending.org or via mail at CURB’s Oakland office.