Tomorrow, members of Californians United for a Responsible Budget (CURB), advocating to reduce state spending on jail and prison expansion, will join the call for $5 Billion more in 2014 to restore our social safety net. 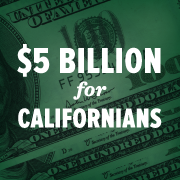 We are uniting with students, educators, parents and health & welfare advocates by saying to the Governor “it’s raining now!”

Join this massive call to action by telling the legislature: It’s time to reinvest in California. Pass a budget that reverses damaging cuts to education, healthcare and other vital programs.

While not rejecting the Governor’s rainy day fund or debt repayment plans outright, the group wants to see the funding to them reduced, as well as the funding for prison expansion.  The group is also calling for an Oil Extraction Tax that would raise $2 billion.

Students, low income families and educators will speak to the struggles they and their communities face because the state has not yet come close to restoring the billions in cuts since 2008.  CSU’s and UC’s are both still nearly $1 billion behind 2007/08 levels; CalWorks, $3.5 billion; Homecare/IHSS $333 million; child care $1 billion; health care $3.7 billion, and the list goes on.  Prop 30 funds have not come near to restoring the $20 billion cut from K-12 schools.

Can you join us in Sacramento?

If you are able to attend this important mobilization please email me at emily@curbprisonspending.org or 510-435-1176 for more details.

Stand with us by send a message to the Legislature!