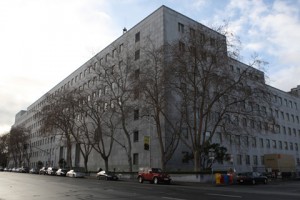 San Francisco— Residents and community organizations are continuing their fight to stop San Franscsico Sherriff Ross Mirkarimi from barreling forward on his controversial plans for a $700 million new jail in the city.  In what is expected to be a heated Board of Supervisors meeting on Tuesday, jail opponents will try to stop theThe Sheriff and San Francisco Board of Supervisors President Chiu from pushing through a resolution that would approve the county’s grant application for jail construction funding from the state.  Recently, supervisor Eric Mar voiced strong opposition to the sheriff’s scheme,saying he “can’t under clear conscience support” what he called “a step forward towards expanding the prison-industrial complex in this country.”  The diverse coalition of residents and organizations working to curb the jail plans say that the jail population could be quickly and drastically reduced, and money redirected away from the construction scheme diverted toward services for communities suffering the brunt of imprisonment in San Francisco.

“Our goal should be to reduce the jail population and use the city’s resources to support the well-being of our most vulnerable residents,” Says Andrea Salinas of Critical Resistance, one of the group working to stop the Sherriff’s plans. “ While San Francisco’s African American population has dwindled to six percent, 56% of the jail population is Black. 75% of the people locked in the San Francisco jail are awaiting trial, mostly because they can’t pay bail.  There is every reason to shrink the system, there are clear and present ways to do that, so it is shameful to even discuss expanding the jail.”

Jail opponents argue that San Francisco jails have been at only around 65% of capacity for almost two years, with approximately 900 empty jail beds every single day. There is currently a proposal to expand pre-trial release which could accommodate up to 500 people,  creating room for the county to close the jails above the Hall of Justice without re-opening unused county jail space.

“One main argument Sheriff Mirkarimi is using to justify his new jail is it that we need the new space to provide family reunification programs,” Says Misty Rojo of California Coalition for Women Prisoners, another group fighting the jail. “When I was in the county jail my kids didn’t want to come visit because they had to sit across a piece of glass, and weren’t able to touch me. It’s much less damaging to see mommy at home than mommy in jail.  Reunification, rehabilitation, job training, education—all of these things the sheriff us using to justify his construction plans—are better if there are provided outside the jail.  And there are already people doing this and many more ready to get to work.”