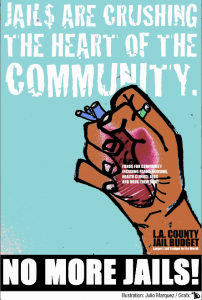 JOIN US TUESDAY TO KEEP THE PRESSURE ON THE LA BOARD OF SUPERVISORS TO STOP THE LA JAIL EXPANSION
Tuesday, March 12th
9am Rally
10am Press Conference
Where:  Steps at 500 W. Temple, Los Angeles
Questions? Contact Diana Zuñiga – 213-864-8931– diana@curbprisonspending.org

These next few weeks will be a critical time for Angelino’s to get the Los Angeles County Board of Supervisors to cancel the women’s jail expansion.  We need your help to keep the pressure on.  We need you to tell the supervisors: No new jails, the only real solution to overcrowding is to reduce the jail population and invest in community-based solutions

The LA County Sheriff’s Department is proposing to spend over $1.5 billion dollars to expand the L.A. County Jail system. The first construction project in the County plan will cost more than $200 million to build 1,156 new jail beds for women, mostly poor women and women of color.  The L.A. County Jail plan also proposes to replace Men’s Central Jail with a new facility with the capacity to cage 5966 men. That is 858 more beds than in the current facility. 3,456 of the beds are proposed to be maximum-security cells. The initial estimated construction costs are over $1 billion not including the debt service on construction bonds.

Stop the construction of the Women’s “Village— it is an expensive fraud. The Sheriff is describing the project as a “Rehabilitative Female Village” that will provide women with mental health, educational, and treatment programming. These women would be much better served by outside programs that support their families and children and make it possible to build a life in their community.

Put AB 109 money in to the community. Building new jails will cost L.A. County residents billions of dollars. There are cheaper and more humane alternatives. The County Board of Supervisors must use AB109 realignment money to fund community programs that support the real needs of people coming home from prison and fund social programs that prevent incarceration and reduce recidivism. We must direct resources into education, jobs and youth programs that promise safer, happier communities.

Implement recommendations from VERA Institute, Austin Report, and the ACLU using alternatives to incarceration to reduce the jail population and cut recidivism rates.

Help us Get Organized

The next few week will be a busy time getting people mobilized to several Board of Supervisor’s meeting to prevent Los Angeles County from expanding the jail.  We need your help turning people out. Please join us at the next…
LA NO MORE JAILS Meeting
Sunday, March 10th at 5 pm
Chuco’s Justice Center
1137 E. Redondo Blvd.
Inglewood, CA 90302Questions? Contact Diana Zuñiga – 213-864-8931– diana@curbprisonspending.org

Call Your Supervisor Today
This will take less than a minute. If you are a resident of Los Angeles County (click here) to figure out which district you live in.  Here’s what to say when you call: