Los Angeles— Over two hundred community members showed an enthusiastic display of opposition to the Board of Supervisors and Sheriff Department’s move to expand LA County’s jails. After noting much community pressure, the Supervisors immediately backed down from the $1.4 billion dollar expansion plan that Sheriff Baca proposed in October. While the supervisors did not decide to withdraw the county’s application for state AB 900 Phase 2 jail construction funding, they did slow the pace on the commissioning of a $5.7 million report on possible jail expansion.

Throughout the meeting a series of reports from the Vera Justice Institute, ACLU, and the anticipated report form expert Jim Austin were cited, outlining countless solutions to LA’s notorious jail conditions and overcrowding. “If the Board of Supervisors is so concerned about improving conditions in the jail then let’s do what we know. The only solution is to reduce the jail population, not to build more cells” notes Emily Harris, Statewide Coordinator for Californians United for a Responsible Budget. “We know the
Supervisors won’t vote for an outright $1.4 billion dollar expansion, but moving forward with the AB 900 applications shows that the Supervisors are still investing in moving forward with failed expansion policies. We fear that in the place of a one-time massive allocation, they will try to deceive LA residents by pushing forward a series of small expansion plans that amount to the same thing.

Outside the Kenneth Hahn administrative building, nearly a dozen LA-based organizations rallied their people for two hours before entering the hall and giving an hour and half of public comment to the Board. “Obviously we want the board of supervisors to align themselves with the vast majority of LA residents in opposing any new jail cells in our county,” said David Chavez of Critical Resistance and the Youth Justice Coalition, two lead organizers of Tuesday’s mobilization. “While the Board voted against the voices of the people today, it is also clear that people are not going to back down from there demands that resources go toward reentry services, educating residents of this city, toward healthcare, toward jobs, not toward locking them up. We will certainly be back, and I am sure we will be back even stronger.” 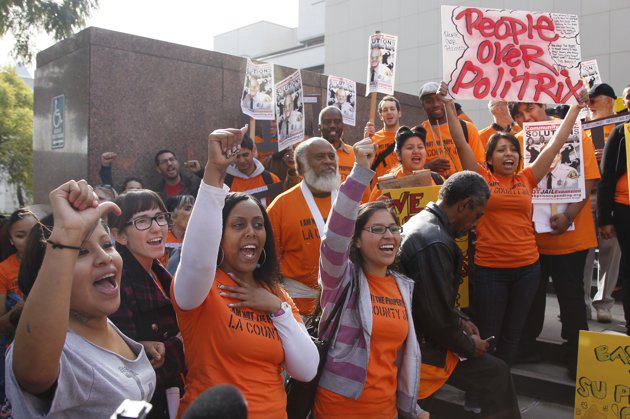