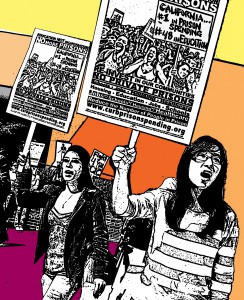 Jerry Brown claims there is no way to avoid cuts to our most vital social services. Meanwhile, he has left the $9 billion prison budget intact and is supporting building more costly jail beds instead of enacting simple sentencing reforms that could reunite families and save California billions of dollars.

Governor Brown’s proposed realignment plan would shift thousands of prisoners from state prisons to county jails. If done correctly the proposed realignment could be an opportunity for county and state priorities to shift away from jail construction and instead focus resources on release and developing independent non-correctional controlled community-based treatment, reentry and mental health programs.  Instead, Assembly Bill AB 94 will make it easier for counties to access funds to build jail beds through AB 900, the largest prison construction plan in the history of the world.

We cannot solve California’s budget crisis or build strong, stable communities without stopping prison and jail construction, reducing the number of people in prison, and using the saved resources to stop cuts to education and our vanishing social safety net.  We must urge Governor Brown to stop pushing forward AB 900 and use his power to stop AB 94.

For more information on the cost of jail construction check-out (CURB) Californians United for a Responsible Budget’s – Budget for Humanity campaign http://curbprisonspending.org/wp-content/uploads/2010/11/Budget-for-Humanity.pdf