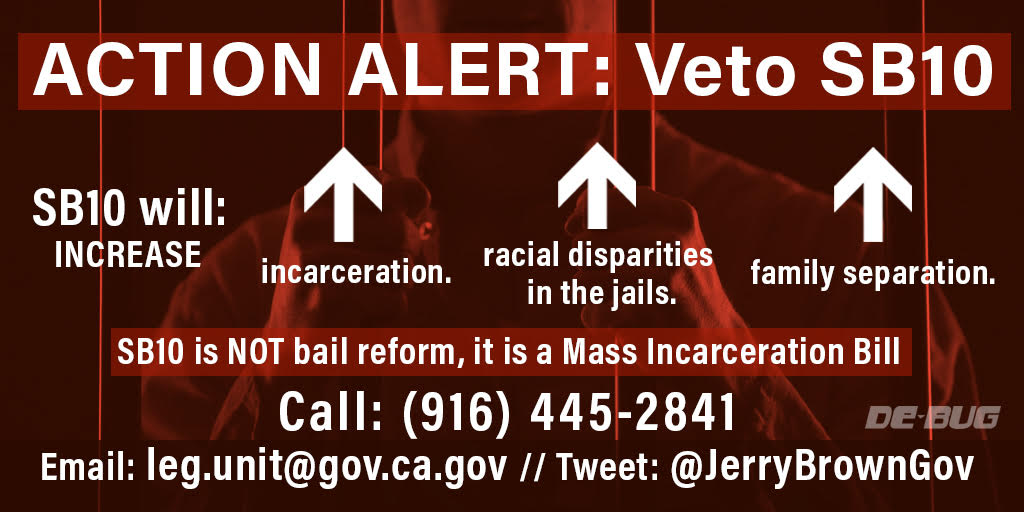 Tell Governor to VETO SB 10 — a deceiving bill that expands preventative detention by replacing money bail with bias risk assessment tools that will incarcerate more people! SB10 is on Governor Brown’s desk and he may sign this bill at any moment! We ask with urgency that you call, email and tweet Governor Brown to not sign SB10!

Introduce yourself and your organization:

Say why you are calling:

I am calling about SB10, a Bail Reform bill that replaces money bail with bias risk assessment instruments and expands preventative detention, allowing anyone arrested to be detained without due process for nearly 2 weeks! We urge Governor Brown to veto this bill. If he signs SB10, he will be remembered as the Governor of mass incarceration.

There are over 50 organizations across the state, including former cosponsors of SB10 that are in opposition to the bill. This includes the ACLU, Silicon Valley De-Bug, Essie Justice Group, LA CAN, Humans Rights Watch, JustLeadershipUSA, NAACP, and more. This alone should confirm that this is a bad bill that will harm the very population and families we are devoted to protect.

SB10 is NOT bail reform, it is a Mass Incarceration Bill